Read the latest news in the December newsletter.

After a successful try-out on October 26, the first official FTC Playground took place yesterday. At 16.00, Team Rembrandts' workshop was cleaned up and ready to receive the teams. Teams had to register in advance and indicate their request for help so the members of FRC Team Rembrandts could prepare themselves well to give all the teams the support they needed.

There was a good vibe, many questions were answered and with the tips given, the teams can get on with their work. From the reactions we received during and after the event, the FTC Playground was more than successful! The teams got a lot out of it and are almost ready to play their first League Meet.

Read the latest news in the October newsletter.

Saturday September 10, the Kickoff of the new POWERPLAYSM season took place. And what an amazing start this was on a beautiful location at the AVANS University of Applied Sciences in Breda. There were 28 teams participating in various master classes, ranging from Strategic Design, Java, Solid Works, Judging, Imagery & Branding etc. etc. All master classes were well attended and during the short breaks in between there was still time to have a team photo taken or to visit the various stands such as Urban Living lab, Breda Robotics and FRC Team Rembrandts. For the rookie teams there was also a demo FTC. For them and all new students the master class Intro to FTC was set up so they immediately got a good idea what it actually means to participate in the FTC.

The unveiling of the new game was spectacular with the big canvas falling down after the red button was pressed. There were also many questions for the referees and the teams had the opportunity to take a closer look at the new game themselves. It will be another fun challenge this new season!

The after movie being created by Avans University of Applied Sciences will be available soon, keep an eye on our social media.

Thank you Avans University of Applied Sciences for hosting and organizing the kickoff. Thank you Bits Foundation for making the connection. It is the start for continued partnership to expand FTC in the Breda region.

Summer break is just around the corner, for some it has even started already. At the last minute we have some great news to share with you.

In collaboration with Avans University of Applied Sciences we will organize the kick-off of the FIRST® Tech Challenge season POWERPLAYSM on Saturday September 10, 2022.

We are very happy with this collaboration! The preparations are in full swing and it promises to be a great and interesting day. Teams can attend various master classes and join interesting activities organized by the business community and students of the Avans University of Applied Sciences. From 6 pm onwards we will watch the global kickoff together, after which we will reveal the field.

Registration for the 2022-2023 POWERPLAYSM season is open as of today.
Please read all the information on the registration page carefully before registering your team. 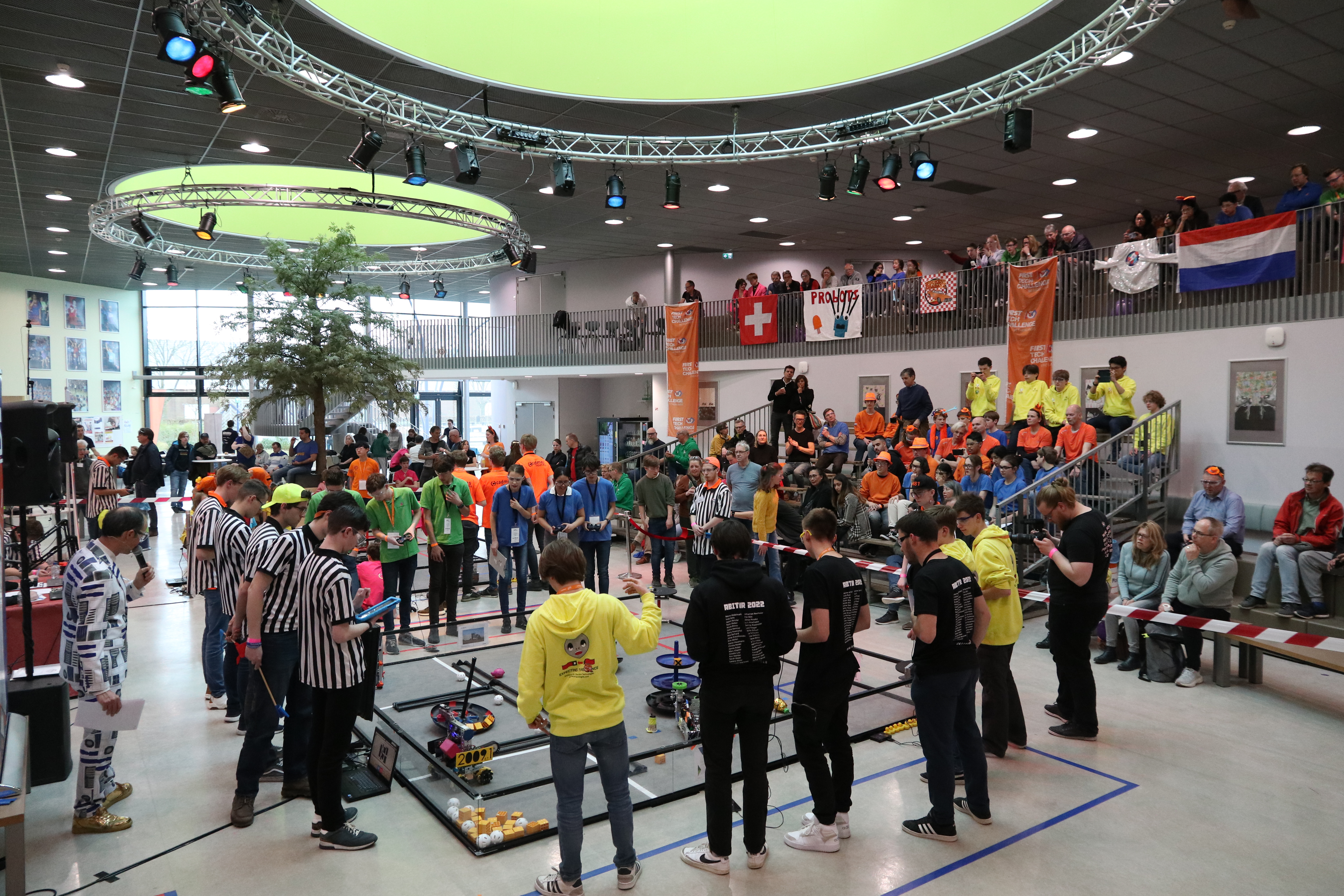 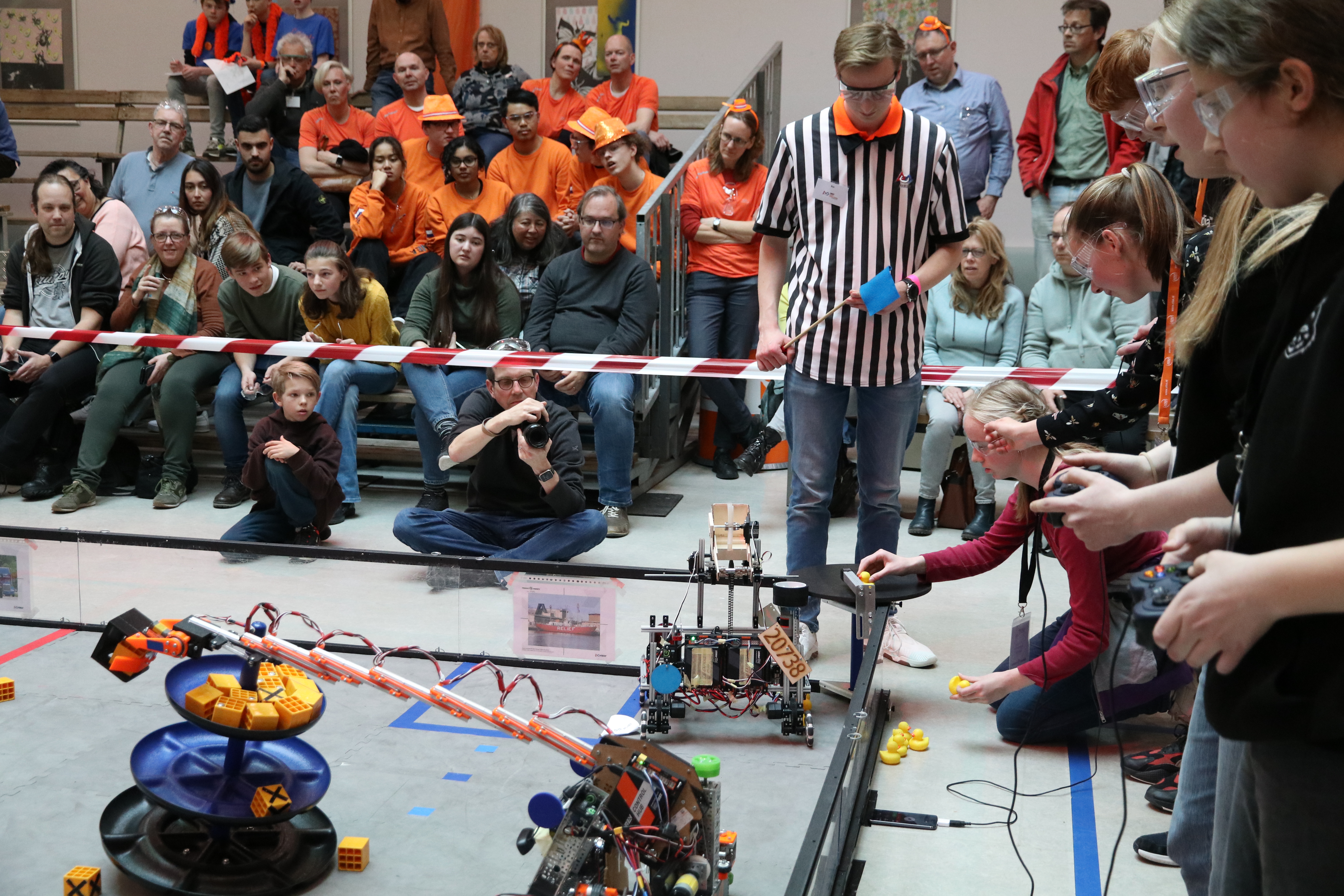 What a great day it was. 28 teams from Netherlands, Germany and Switzerland came to Veghel today to participate in the Dutch League Championship.

In the morning all teams presented themselves and their robot to the jury and there was time to practice with the robot. In the afternoon, all teams came into action on the competition field and played exciting matches in alliances.

Between 17:30 and 19:00 it was time to relax, eat fries with snack and dance. After this everyone went crazy during the playoffs, where the Dutch highest score was even improved several times.

It was a long but inspiring day, full of enthusiasm, spirit, happy teams and great volunteers.

An important day, as the 28 teams that qualified for the Dutch League Championship on April 2 in Veghel were announced.

The lucky teams have been notified by mail and are published on our website on the following page:

The 4th League Meet, also the last possibility for teams to qualify for the NK, was organized today at the Newmancollege in Breda.

23 Teams participated and just like last week they played 6 exciting robot matches.
At the same time, 6 other teams played the matches remote. We enjoyed the enthusiasm of over 250 students, their coaches, visitors and the volunteers who make our events possible.

The Winner of the Day is team Pink of the Future of the Maerlant-lyceum in the Hague. Congratulations!

Today the 3rd League Meet of the season took place at the Lorentz Lyceum in Eindhoven.

The participating teams competed in 6 spectacular robot matches. The enthusiasm was overwhelming and even a new Dutch record was achieved. Team ProBotiX, in an alliance with Stanislas Tech Academy, scored 226 points. With this score team ProBotiX became the Winner of the Day.

View all rankings and scores on theorangealliance.org

Today another Dutch team managed to qualify for the World Championship in Houston.

The Stanislas Tech Team, one of the Dutch teams that participated in the remote DoDEA FTC Championship in Kaiserslautern last week, has been awarded as Inspire runner up by the judges. During the Award ceremony they received the great news that with this accomplishment they have qualified for Worlds.

Team F.R.O.G. Frog Robots Of Germany was the overall winner, they received the Inspire Award and the Award for the highest robot match score. With these achievements they have of course also qualified for Worlds.

Congratulations to both teams!

Today we have announced which teams may represent the Netherlands at the World Championship in Houston (USA), on April 20 - April 23, 2022.

Despite COVID-19, there were an impressive 13 teams who are very eager to go to America to show what they have accomplished in the FREIGHT FRENZYTM season.
Unfortunately we are only allowed to send 2 teams, normally based on the results of the FTC NL Championship. However, due to Corona measures, we have had to postpone the Championship. Because the new date (April 2) is scheduled too close to the Championship in Houston, the teams involved would have too little preparation time. We therefore selected the teams based on submitted pitches. We enjoyed viewing / reading all the pitches. It was a tough decision, but the lucky teams are:

Congratulations, you are real FIRST ambassadors! 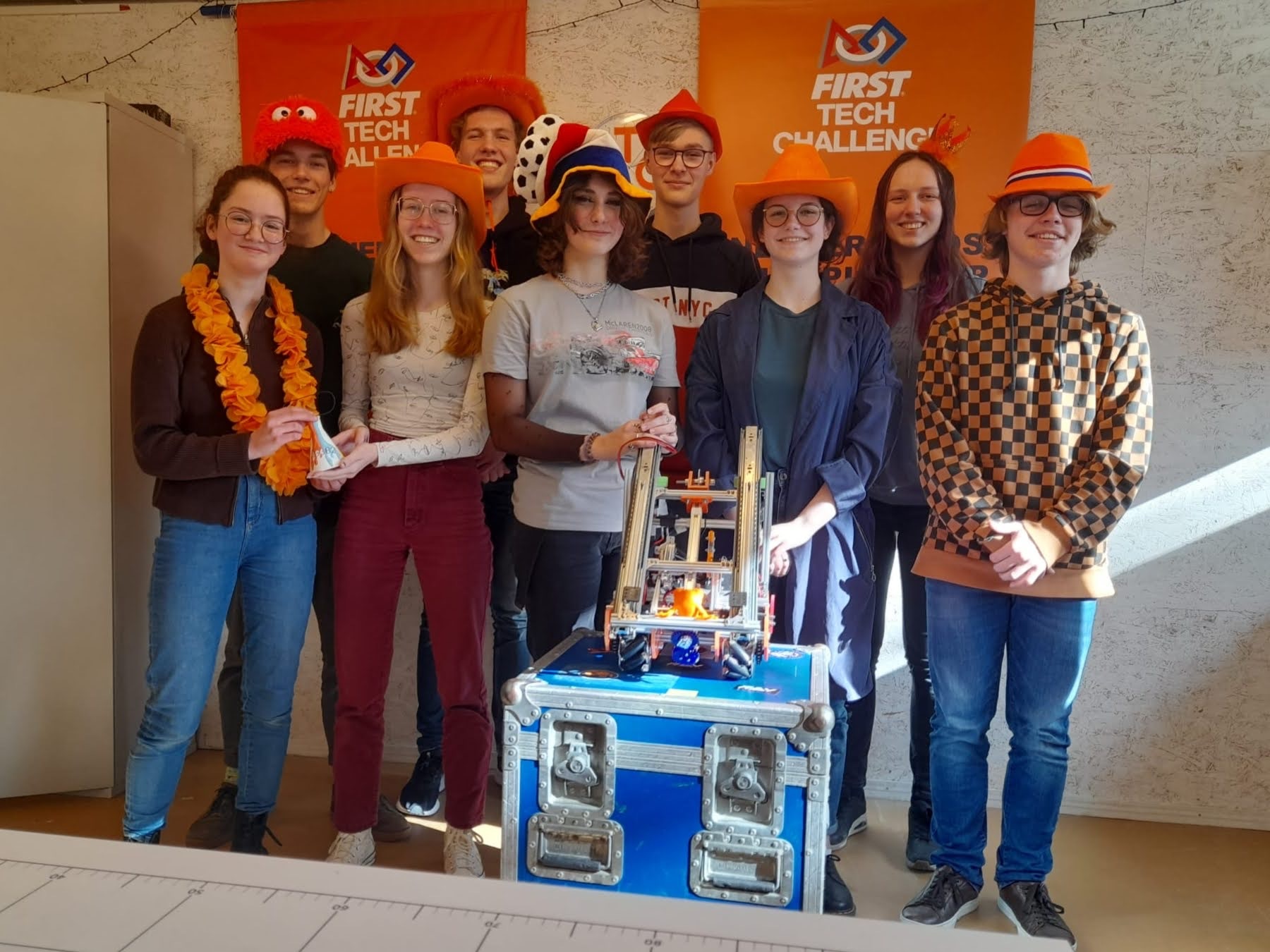 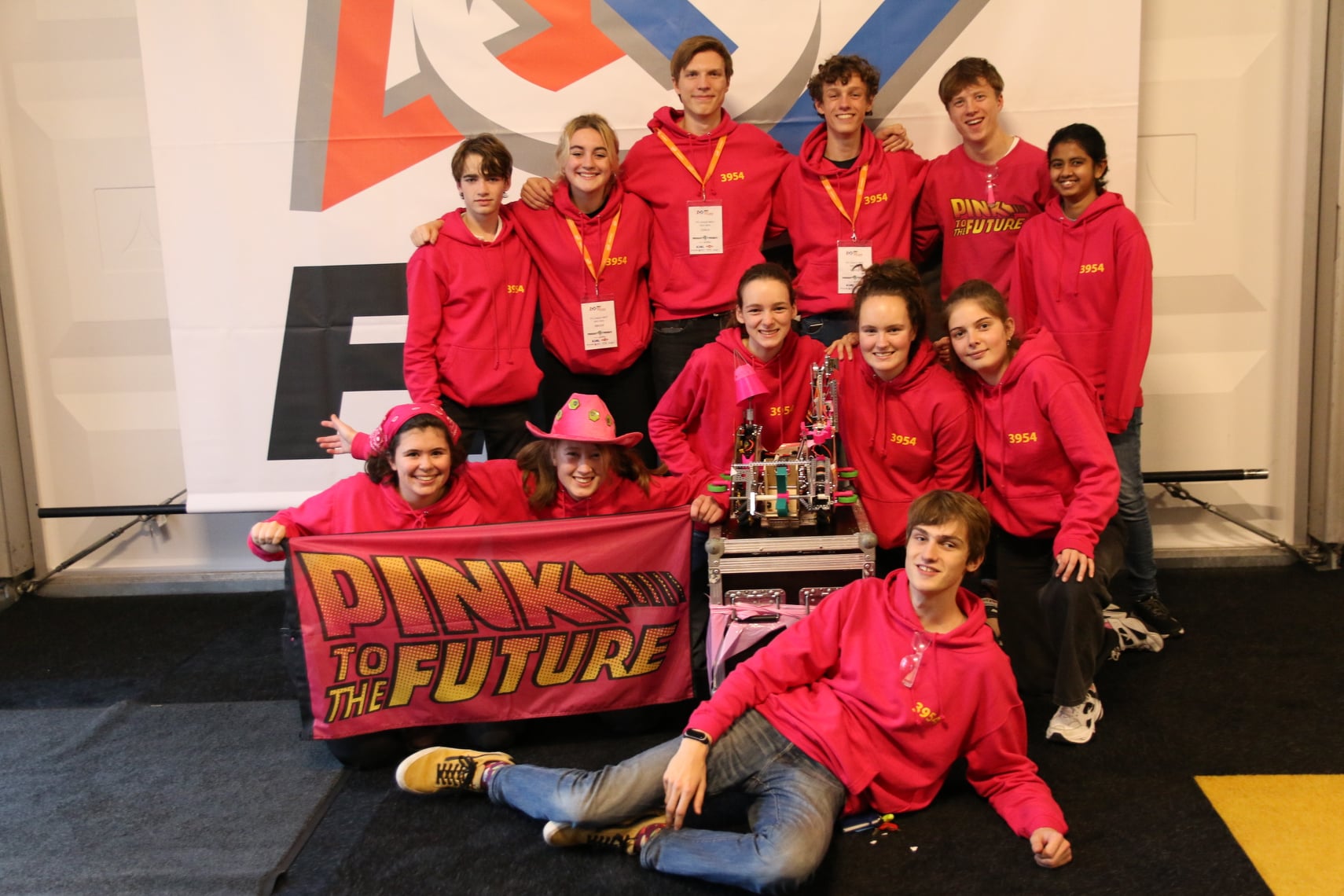